Besides the basic hunting and retrieving work the Labrador does in the field, their great work ethic and intelligence have earned them many prestigious awards and challenging work tasks. To name a few, they have excelled in High level competition AKC obedience, Agility, Search and Rescue, all areas of Detection work (Bomb, Narcotic, Cadaver etc.), Guide dog for the Blind, Assistance dogs, Tracking, Field Trail, Hunting and the list goes on….

The high popularity of the Lab is due in large part to its great versatility combined with a typically easygoing, amiable temperament. Helen Warwick wrote In her 1964 book, The Complete Labrador Retriever, “The ideal Labrador temperament is one of a kindly, outgoing, adaptable nature, anxious to please and non-quarrelsome with man or beast.” This statement being true then, is as true today. When it comes to choosing a family pet they win hands down. They are known as very friendly, intelligent, energetic and good natured, making them excellent companions and working dogs. 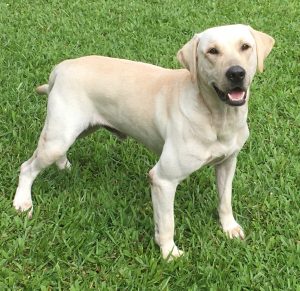 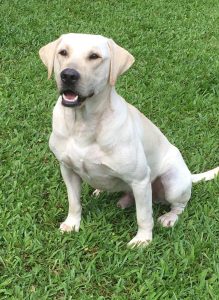 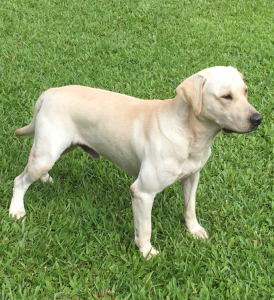 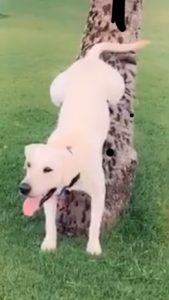 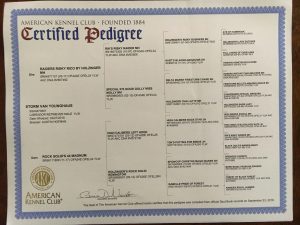 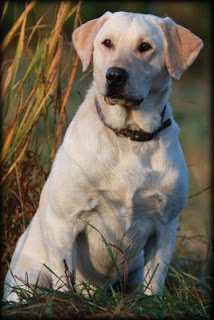 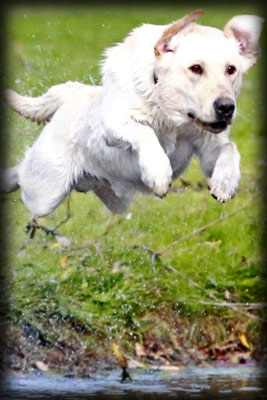 Storm’s sire Rico a MH titled male who comes to us by way of Holzinger Kennels in Minnesota. Holzinger Kennels is a very well renowned kennel throughout the U.S. just south of the Twin Cities. Their reputation speaks for itself producing dogs such as GMPR MHR Rik’s Risky Raider MH, MPR Wyvernaze Audley MH (Brock), GMPR Cashingers Cattail Corky, MPR Brocks Golden Nugget, CP Cashzinger Coal Cuts Loose, Cashzingers Special Brew MH, MHR MPR Cashingers Brier Tuck MH (Tucker), and MHR MPR Horse and Hunt Gabe MH. Rico is Raider son whose bloodline was brought back to us via frozen semen years after Raider’s passing.  Raider’s bloodline is one of the most prominent bloodlines in the history of pointing labs, and was an integral part of bringing notoriety to the pointing lab back in the mid-90’s.  Simply put, in the pointing world Raider is considered to be a legend!  The accomplishments of dogs from this pedigree are too many too list but there are many GMPR, MH, MHR and National Champions on both sides of this breeding! Rico is a 65-70 pound powerhouse that has that same great look Raider possessed.  His pups possess a strong desire to hunt and have strong natural point. He has hunted extensively on waterfowl and upland, and he lives to hunt and will go strong all day long!  To say that I’m excited about this Raider “grandsired” litter is an understatement.  There aren’t too many opportunities to bring a bloodline like this back, and Mags matches up perfectly with Rico! Mags and Rico come with all the health clearances.  Both have excellent hip ratings, clear on eyes, and normal on elbows. Pups will be EIC/CNM clear by parentage and will come with a 28 month health guarantee.

Rico is a 70-75 pound male that possesses those same great traits that Raider had!  His drive and pedigree are unmatched.  There aren’t too many opportunities to be able to breed to a stud like Rico, who is a full son of Raider.  Some of his notables include GMPR MHR Rik’s Risky Raider MH, GMHR I HRCH Delta Marsh Firestorm Chase SH, Cashinger’s Special Brew MH, Holzinger’s Risky Business SH, Kurt’s Blazing Behavior SH, and many more.  Rico is a SH titled male with 4 master passes (will be finishing his master title this summer).  Once his master title is completed he will work towards his APLA titles.  Rico is an all-around great male with plenty of athleticism, nose, natural pointing ability, marking, and passion!  One thing that has been said of the Raider line over the years is how intelligent the offspring has been, and how quickly pups develop!  Having bred this same line over the years, I can attest to that!  Rico also doubles as an all-around great family dog!  Don’t let the titles fool you, he lives in the house, and he is spoiled beyond belief.   Rico’s father passed away in 2008, and this was said about him:

Rico possesses many of those same characteristics listed about Raider, and it’s truly an honor and privilege to have the opportunity to pair Maggie with him!  These two should match up to produce that “once in a lifetime” companion gundog that everyone is looking for! 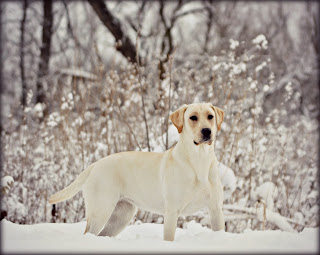 Storms dam Mags is 55 pound female out of Remi and Punch.  This has been a breeding that has proven itself time and time again over the years, and I couldn’t resist keeping a female out of that pairing. When you think of that dog that has all that drive you want, Mags has it! She is one of the few dogs I know that can match Belle’s drive at such a young age!  In her first hunting season (8 months old) she would match all my seasoned dogs step for step in the field, and at times lead the way!  She is hands down one of the fastest and most athletic dogs I have ever been around!  She is a stunning lighter colored female with darker highlights around the eyes, nose, and ears.  I absolutely love her look!  Her pedigree includes:  GMPR MHR Rik’s Risky Raider MH,  GMPR Grits of Black Forest SH, GMPR Spioncop Christos Magic Baker SH, GMPR HIgh Sierra Kociac MH, GMPR PDB Angel’s Blackjack Kati, FC AFC Black Gold’s Markin Marti, and many more!  She is a great mix of pointing and field trial lines!  Mags is an extremely versatile dog that possesses a great nose, strong natural pointing instinct, and exceptional marking ability.  If I had to pick one trait that sticks out with Maggie it would be her drive!  She is always 3 steps ahead of the competition!   She is an exceptional marker, and has an uncanny knack to see where everything lands and once she does she turns on the burners and no one is going to beat her there!   It’s not too often you find a dog that has so much drive, but yet is still a great family dog.  Most days you can find Mags hanging out in the back yard with my kids.  My 4 year old daughter will constantly walk her around on and off the leash. Her favorite thing to do is make Mags lie down, lay in the grass next to her and rub her belly!   Maggie definitely has that same “lover mentality” her momma has, and is always looking for attention.  Mags has spent a majority of her time in the upland fields of Iowa and South Dakota. She also has experience as a waterfowl dog and is great in the water.  In the springtime she spends time hiking with me through the woods looking for shed antlers.  She is that dog that you love to have around in every season because she is so versatile, but even more importantly she loves to please no matter what she’s doing! 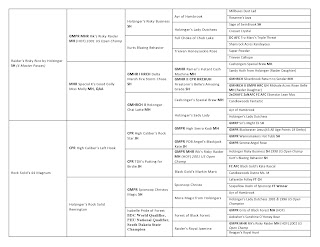