THE VERY BEGINNING
The forefathers of our dogs were probably wolves which were domesticated, and in the thousands of years that followed were used for different purposes and developed accordingly. Hunting, fighting, carrying loads and herding were just a few of the tasks that the dogs were given. Within these groups several different breeds came into existence and by looks and nature distinguished themselves from other dogs. A shepherd dog is nothing more that a dog than belonged to, and was used by a shepherd, helping him to look after the sheep or cattle. A dog with a high level of independence was needed to keep the flock   or herd together , drive it, guard,    and defend it. Some breeds were specialized in working with a certain type   of animal  or a specific task, while others were  all round. 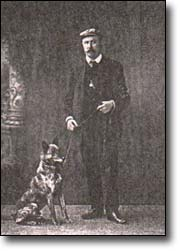 J. Steijns and “Frits”
Frits was bought by Steijns for 2 guilders and  50cts from
a farmer who was glad to get rid of this “stupid” dog. Steijns, who was attracted by the intelligent look of Frits, trained him in six weeks to do police work.  He won the first  place prize at an international competition in Saarbrucken, Germany in 1908

The area where the shepherd worked also had quite a lot to do with   what the dog looked like. High, bare, cold mountains required a different type of dog than the flat lands and the more moderate temperature of the Netherlands did.

Let’s go to the Netherlands, often referred to as Holland, around the nineteenth century. There were hardly any fenced meadows, for sheep, horses, or cattle. Since sheep weren’t picky and the latter two were, the sheep were taken to the heather fields by a shepherd with a dog. Almost a third of the country consisted of sandy soil that would not grow much more than heather. The sheep that grazed it would produce dung that in return was used to improve the soil so it could be used for agriculture.  To avoid the dung being ‘lost’ out on the heather where it wouldn’t do the farmers much good, the sheep were driven out to the heather during the day and returned to the stables at night. They would leave the dung in the stable at night, and straw or heather was added before the next layer was deposited. Thus the amount of dung grew to an extent where the sheep would be with their backs against a ceiling that sometimes measured 12 feet or higher. Other types of sheep were kept for meat, milk and wool, and were left to graze by the sides of the roads since the fresh grass would improve their quality. 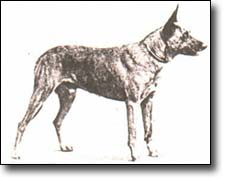 Here the dogs were used to drive the sheep slowly forward and keep them out of the yards and fields that were used for agriculture. Sometimes the dogs had other tasks beside the flock; since tending sheep could be a very meager existence, poaching was fairly common and not without danger. Some dogs may even have pulled small loads when they were ‘off duty’

Due to the replanting of forests and chemical fertilizers, the flocks of sheep which at one point were estimated at 800,000 and worked by some 6,000 shepherd-dogs, started to disappear in the mid nineteenth century. Just in time for our dogs, in 1898, the ‘Nederlandse Herdershonden Club’ (Dutch Shepherd Dog Club) was formed.

THE NHC
Certainly in those early years as described above, there was no need for fancy looking dogs. The only goal being workability, the Dutch Shepherd, or ‘Hollander’ as he is affectionately called in the Netherlands, wasn’t a breed created to fit someone’s ideal, it just developed. As the NHC was being formed in the late 19th century, the need for working dogs was disappearing, but a few people could afford to keep a dog just for the fun of it. They started to worry about conformation, and at agriculture shows, just like in Belgium, a certain number of shepherds appeared that may have looked similar in type, but certainly not in color. 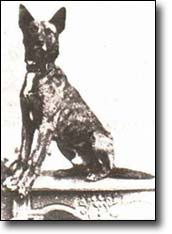 Presto, 1894
Compare his appearance to “Sirol” on our Malinois History The first description of the breed allows six coat varieties; rough haired, standing long hair, laying long hair, bristle haired, shorthaired and medium longhaired. There was a lot of confusion in those early years. The club was started by people that just loved shepherds, no matter whether they were Dutch, German, Belgian, French, or whatever. Among the early members were M. Kessler and J Steijns, two of the three founders of the future KNPV; (1907) the Royal Dutch Police Dog Association. In those days it was possible to enter a dog in a show as either a Belgian Shepherd or a Dutch Shepherd which shows how much these two breeds were alike. Eventually there was a split, and the club then was only for ‘Hollandaise Herders,’ Dutch Shepherds. 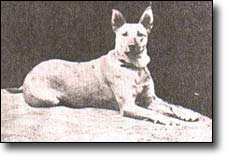 Spits, Dutch Shepherd Bitch,
pedigree reg: NPV 149 CHANGING BREED STANDARDS
Until 1914 there were a lot of changes in the breed standard. The coat varieties were narrowed down to short, long, and rough hair. Bitches had to be a minimum of 19 3/4’ (50cm) high, dogs 21 3/4’ (55 cm). All colors were permitted provided that they weren’t too colorful. White however, was restricted to chest and toes. The desire to create a breed that would clearly distinguish itself from the German and Belgian Shepherd dogs led to a color restriction in 1914. Silver or gold-brindle for the shorthair, silver and gold brindle, as well as pepper and salt and blue-gray for the rough hair, and silver and gold brindle plus auburn for the longhair. Silver being gray stripes on black, and gold being yellow or red stripes on black. The minimum sizes for the short and rough haired varieties were raised by about two inches, with a little less for the longhaired variety. From that moment on all white was forbidden. Those drastic restrictions in permitted color and/or size led to an enormous deterioration of the available genetic material. More than anything, the exclusion of all white excluded an enormous amount of dogs from the breed pool since white is such a dominant gene. In Belgium however, yellow Dutch Shepherds with white markings could suddenly be entered as Belgian Shepherds (shorthair, Malinois) since there was no restriction of white there. Brindle Belgians could, in return, be entered as Dutch Shepherds. In 1928 some white was permitted again, and in 1934, yellow, red, brown, and liver were re-introduced as permitted colors for the shorthair, with yellow and reddish brown, as well as ashen re-introduced for the rough air. The longhair had no color changes. It was too late however. The breed base was small and a lot of good dogs had already been excluded due to the several color and structure changes. The clock could not be turned back again. In 1960 the colors were restricted back to the way things were in 1914. Only this time the auburn longhair disappeared Due to growing interest in training for police work, some breeders wanted to breed a bigger dog. Since all look-alikes in those days could be entered as Dutch Shepherds and since brindle is a dominant color, bigger boned dogs were bred into the Dutch Shepherds. There are records of some GSD crosses into the shorthaired version that occurred between 1910 and 1916. The German Shepherd in those days was also a very young breed, and it is safe to say that the differences between the German, Belgian, and Dutch Shepherds were a lot smaller than they are now. Although the German Shepherd was still a larger dog than the Belgian and Hollander, it resembled them much more in those days than it does now. 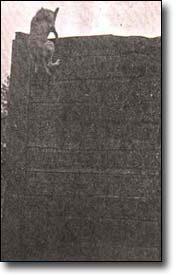 Frits from J. Steijns
scales a 8”8′ (2.65m) wall Though we are talking about a very limited amount of dogs in the Dutch Shepherd population, (six DS of mixed blood)  it took quite some time to get rid of the subsequent undesirable traits. In 1892 and 1899 the Belgian Shepherds and German Shepherds were fortunate enough to have such great admirers and leaders as Professor Reul for the Belgians, and Max von Stephanitz for the Germans. They made an inventory of their beloved breeds before they tried to come up with a standard and  pinpointed the desired colors. Sure, there were changes over the years, but non so dangerous or radical as were made for the ‘Hollanders’. The Dutch felt that they had to distinguish themselves from the very similar Belgian Shepherds, and with the limitation of the color varieties to brindle, later without any white, the damage was quickly done. For years the litters of  the short and rough haired versions in particular, averaged 4.6 and this had nothing to do with fertility, but with the fact that a lot of pups were either killed because they had the wrong colors, or they were never entered into the pedigrees. Maybe the breeders had no choice, or maybe they didn’t know in those days that the phenotype of full siblings better reflects the genes carried by an individual dog than the phenotype of the parents. In other words, breed two parents with desirable color, but if you get only a few pups with that same desirable color out of that litter, those pups that do will still have a good chance of passing on undesirable colors to their offspring. The low average of 4.6 suggests that maybe half the litter was culled, and that almost guarantees ongoing undesirable traits in the future litters of the ‘correct’ pups. And thus the breed base got smaller and smaller.

After the second world war there was definitely a need for some fresh blood, and dogs of unknown background, along with some Belgian Malinois, were suggested  for the shorthaired version, and Tervurens for the longhair. One thing was for sure however, nobody had any desire to breed to German Shepherds again since that little episode before the first world war had taken several years to straighten back out.

Nowadays there are about 2000 FCI shorthaired Dutch Shepherds, about half as many longhaired ones and the rough haired version about 3/4 of that. There are still quite a few Dutch Shepherds of ‘unknown’ background that do not have an FCI recognized pedigree. That doesn’t mean that no one knows where these dogs came from though. Mainly the KNPV members in Holland breed Dutch Shepherds for their working ability, only sometimes compromising their looks in favor of the amazing work qualities that a KNPV dog should have. Although these dogs often have a good deal of Belgian Malinois blood in them, it is amazing how the character always remains …..a typically intelligent, stubborn, handler oriented Hollander.